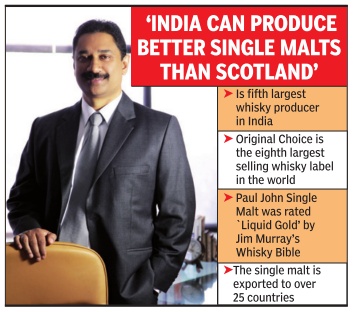 Paul John believes the failure of his maiden business venture,which he started straight out of college, was a major stepping stone to his success today. And his first lesson was not to do business on credit. “Money due is like money lost forever in a bad investment,“ he says. Many may not agree with this, but John was baptized into business by fire. “I lost all my money in the biscuit factory which I started. It was a disaster and I had to go into hiding from my creditors. I had a bundle of cheques which had bounced from people who took stock and promised to pay me in 30 days. In reality, they never intended to,“ he says.

So,in business, his approach now is: everybody is a crook unless proven otherwise.“I would rather not do business than do it on credit. These are harsh lessons,completely the opposite of the cocooned life in my college days. But I am gladI learnt it in the beginning,“ he says.

About two years later, in 1992, John started his namesakedistillery to produce al cohol after getting the requisite license. His fatherwas into trading of liquor ­ he owned retail and wholesale shops. So it wasfamiliar territory for John. “I was very influenced by my dad. I used toaccompany him in his business trips whenever I had time,“ he recalls.

John Distilleries (JDL), which is India's fifth largest whiskyproducer, has eight manufacturing units spread over seven states, including oneeach in Bengaluru and Davangere. Over the years, the company, which startedwith Original Choice whisky, ventured into other categories such as wine andbrandy, climbing up the value chain to cater not only to the economy butpremium and super premium segments.

The 25-year-old JDL has sold over 11 million cases of OriginalChoice. The latter is also the eighth largest selling whisky label globally,according to Drinks International. The ingeniously developed Paul John SingleMalt, together with its cross-town rival Amrut, has revamped the image ofIndian whiskies in global markets. The single malt ­ made using six-row barleyfrom the Himalayan foothills ­ was rated `Liquid Gold' by Jim Murray's WhiskyBible, one of the world's leading whisky guides. The six-row barley results ina rich, more viscous brew compared to single malts made with two-row barleygrown in the US and Europe. The single malt is exported to over 25 countries,including the US, UK, Germany, France and Canada.

John's move to the US for about eight years towards the end of thelast century also helped him expand his horizon about the alcohol industry .“Inthe West, drinking has a lot to do with experience and pleasure, unlike inIndia where it is all about getting a kick. I was introduced to wine drinkingthere, which made me start the premium Big Banyan wine here.“

A similar visit to Scotland sparked the idea to attempt production of single malt whisky in India. In spite of being aware of the risks ­ no one had tried making single malts in the country ­ John was confident of pulling it off. The main ingredients, barley and water, were of good quality, he says. “So why not think out of the box? Single malt is an experience, the taste and flavour is a world by itself. In fact, India and Japan have the ability to produce better single malts than Scotland,“ John says.