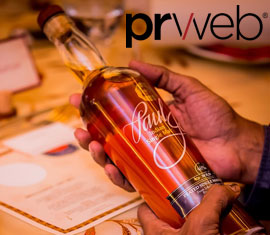 John Distilleries Ltd. (JDL), one of the world’s leading specialists in the creation and production of Indian distilled beverages, has launched Paul John Indian Single Malt Whisky in the United States.

Chairman Paul P. John, together with the wisdom and extraordinary skill of Master Distiller Michael D’Souza, set out to break the mold and create the “Great Indian Single Malt Whisky.” Distilled by the warm and tropical beaches of Goa, Paul John Indian Single Malt Whisky is a premium spirit crafted from six-row barley grains that grow at the foothills of the Himalayas. Harvested in the summer, the mature six-row barley is responsible for the distinct smokiness and flavor of Paul John Whisky.

“We are excited to introduce a range of Paul John Whiskies in the United States. Goa is a sensual delight of both sea and spice and the people here are welcoming and lively. They slow down and appreciate beauty, exactly the way a fine single malt should be experienced,” explained Chairman Paul P. John.

Founded in 1999, Domaine Select Wine & Spirits (DSWS) is dedicated to wines and artisanal spirits of the highest quality and which demonstrate excellence and tremendous character, particular to their origin. DSWS is committed to transmitting the individuality of their producers; expressing diversity, tradition and personality is the tenet of DSWS. Domaine Select Wine & Spirits was named 2010 Importer of the Year by FOOD & WINE Magazine.