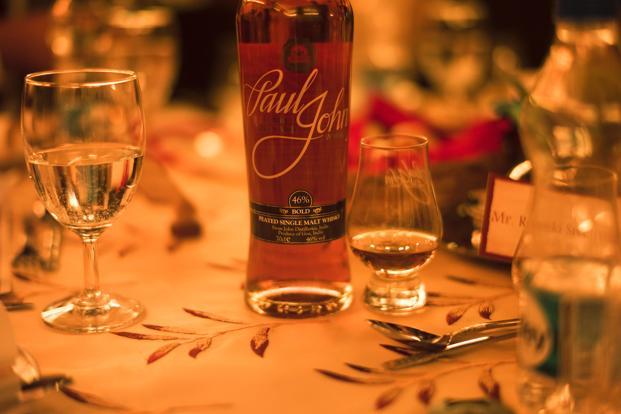 In 2009, an unknown Indian single malt whisky from Bengaluru, Amrut  Fusion, was rated the third best whisky in the world by Jim Murray’s Whisky Bible, one of the world’s leading and comprehensive whisky raters.

The ranking sent shockwaves across the whisky world. Traditional single-malt distilleries were scandalized. It was a shot in the arm for international whisky and, of course, Indian distillers.

In 2013, another Indian single malt (from Goa this time), made the experts sit up and take notice. Paul John Single Malt, from John Distilleries Ltd (JDL), was rated “Liquid Gold” by the Whisky Bible, and soon, the awards floodgates opened up.

I managed to taste the two Paul John expressions a few months ago when the first stocks arrived and was, to put it mildly, very impressed. Imagine my delight when an invite landed at my door for a formal tasting event in Bengaluru.

Amrut’s achievements have definitely paved the way for other Indian distillers to enter the whisky market. However, John Paul is an exceptional malt in its own right. Established in 1992, JDL sells more than 10 million cases a year. Its chairman Paul P. John wanted to create a world-class single malt, collaborating with his master distiller.

JDL uses Indian six-row barley, which lends a unique character. Scotch (and most malt whiskies) use the two-row barley that grows in Europe and America. Six-row barley results in a rich, more viscous brew thanks to a thicker husk and higher enzyme and protein content.

JDL’s master distiller Michael John d’Souza had flown down from Goa to lead the audience through the essentials of tasting—an appreciation that needs some delicate attention.

D’Souza, who hails from Bengaluru, rose up the JDL ranks in the Goa distillery. In 2009, he became the master distiller and has put all his skills and experience to craft their single malts down to the last dram.

His passion is obvious and his knowledge of the whisky-making process encyclopaedic. His understanding of the various contributors to the nose, flavour and finish of his creations—some very subtle is incredible.

The master distiller credits a lot of the whisky’s personality to Goa and the Arabian Sea. The coastal weather lends a “minerable” character as well as rich colour. Paul John bottles come proudly uncoloured. The American oak barrels (virgin to young bourbon) in which they mature (for around four to seven years) impart a coconut-y and tropical fruit sweetness to the malts. All of the whisky’s ingredients are sourced in India, except the peat, which is imported from Islay, Scotland.

It is interesting to note the amazing “maturation benefit” that tropical climates can provide whisky makers. One year of barrel maturation in warm and humid Goa (or Bengaluru for Amrut) is the equivalent of about three to five years in temperate Scotland (or Japan). Imagine the high inventory cost leverage tropical distillers can derive as they can ship younger (yet well-matured) whisky. Of course, for the same reason, there is more whisky lost in India through the permeable oak, a term called “Angel’s Share” by the distillers.

We fittingly kicked off the evening’s proceedings with a glass of freshly brewed (on location) six-row barley beer. The first version we tasted that evening was John Paul Brilliance. It was very sweet on the nose, with vanilla, honey, cinnamon and mild spices. It was crisp, sweet and spicy, and more honey on the taste. The finish was very smooth.

Edited was next. This is a really complex whisky—I could smell  a play of sweet and spice and hints of peat smoke. The medicinal smokiness was distinctive but subtle along with honey and malty grain on the palate. I found it a wonderfully well-balanced malt.

Bold was Michael’s gift to the audience. It is a fully peated whisky from the JDL stable not yet available in the market, making it truly exclusive. The peat was more exemplified than Edited in both smell and taste. But this isn’t a typical Islay heavyweight (with due apologies to Islay lovers). The unidimensional peat-blast of the Islays is replaced with a fruity, spicy woodiness.

All three whiskies were remarkable in their own right—an achievement for a young distillery that has, with little warning, stormed into the global whisky scene. Both Edited and Brilliance are easily available in Bengaluru.