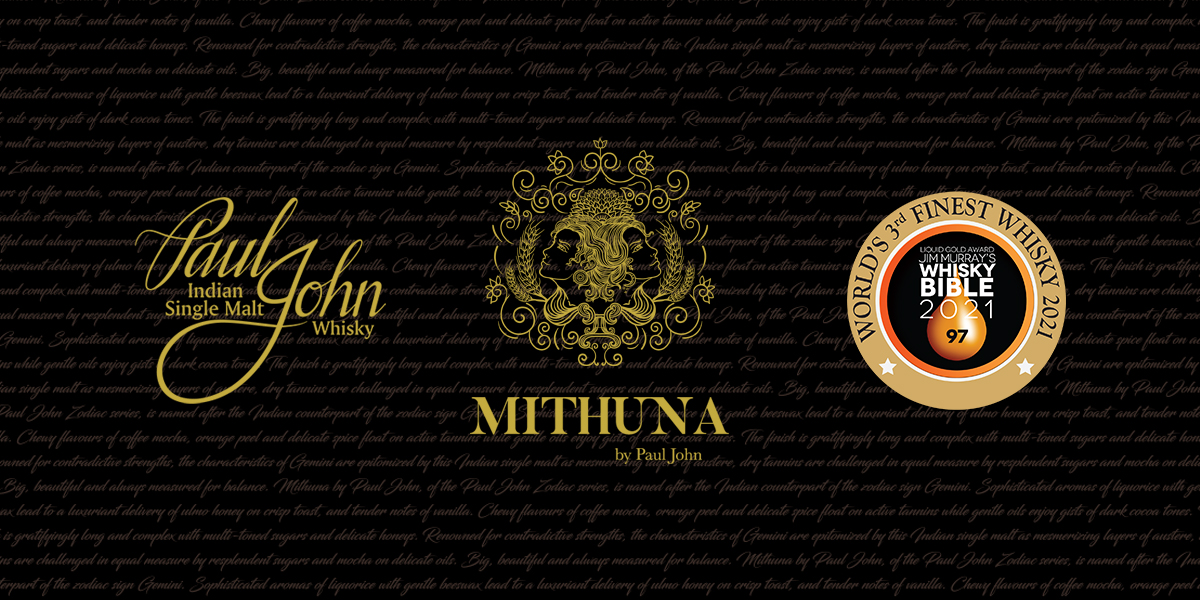 Bengaluru, India (Sept. 16, 2020) Paul John Whisky’s soon to be launched Mithuna by Paul John has been declared the 3rd Finest Whisky in the World by esteemed whisky reviewer Jim Murray in his acclaimed “Jim Murray’s Whisky Bible 2021.” Set to be released worldwide in November, Mithuna by Paul John is the second expression of the Zodiac series of Paul John Indian Single Malt from John Distilleries Pvt Ltd (JDPL). JDPL is a leading Indian spirits company, in which Sazerac Company, the largest family-owned distilled spirits company in the United States, is an active stakeholder.

Stagg Jr. (128.4 proof) from Sazerac has been named the second finest whisky in the world. In total, nine whiskies from Sazerac received top honors in their category.

In describing Mithuna for his 2021 Whisky Bible, Murray says, “If Mithuna means “Ultimate,” then it is the perfect name. Or maybe Mithuna means “Perfect,” then it is pretty close. It is that very rarest of things. And, if nothing else, announces Paul John Distillery on the world stage of truly great distilleries. This is a whisky to devour…while it devours you.”

“For our whisky to be declared the world’s 3rd finest whisky in the world is perhaps the greatest achievement a whisky maker could possibly dream of and this speaks especially of the passion and dedication of our Master Distiller, Michael D’Souza. For an Indian whisky to attain such an honour has proven that India is on par and even better in terms of quality with other international whiskies. It marks a turning point in the emergence of India as a serious player in the world of single malt. We are humbled and honoured to have received this award and we will continue to dedicate our efforts to further improve our quality to the highest possible standards,” said Paul P John, Chairman and Managing Director, JDPL.

Murray tastes more than 4,700 whiskies for his yearly edition, and in Murray’s ranking system, any whisky which scores in the 94-97.5 range is deemed by him as “superstar whiskies that give us all a reason to live.”

Jim Murray is a legend and leading player on the world’s whisky stage. It is now over 25 years since he became the world’s first-ever full-time whisky writer. The 2021 edition of his Whisky Bible marks the 18th year of annual publication. “Jim Murray’s Whisky Bible 2021” can be pre-ordered at http://whiskybible.com/

Mithuna by Paul John, of the Paul John Zodiac series, is named after the Indian counterpart of the zodiac sign Gemini.

Sophisticated aromas of liquorice with gentle beeswax lead to a luxuriant delivery of ulmo honey on crisp toast, and tender notes of vanilla. Chewy flavours of coffee mocha, orange peel and delicate spice float on active tannins while gentle oils enjoy a gist of dark cocoa tones. The finish is gratifyingly long and complex with multi-toned sugars and delicate honeys.

Renowned for contradictive strengths, the characteristics of Gemini are epitomized by this Indian single malt as mesmerizing layers of austere, dry tannins are challenged in equal measure by resplendent sugars and mocha on delicate oils.

The Paul John Single Malts were launched in the UK in 2012 and were soon acclaimed to be equal to or even better than single malts produced elsewhere. Approval from single malt enthusiasts and innumerable global awards further proved our excellence and encouraged us to take our single malts across the world.

Craft, skilfully chosen indigenous ingredients, and the warm environs of Goa create the magic that is Paul John whisky.

A conscious decision was taken to create high quality single malts at affordable prices allowing us to introduce many more to the flavourful taste of single malts.